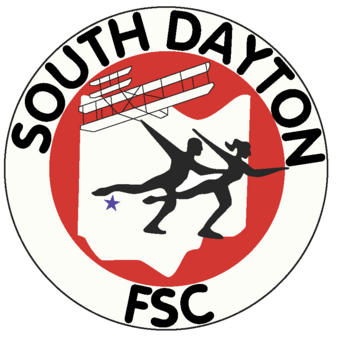 Membership forms for the 2022/23 Season will be available at a later date.

Since 1972, The South Dayton Figure Skating Club (SDFSC) has provided full membership to the United States Figure Skating Association. Membership to SDFSC is the next step for the serious ice skater who has completed any of the USFSA sponsored "Learn to Skate" programs offered in Dayton and the surrounding areas, and wishes to expand their skills into different figure skating disciplines.

The SDFSC coaching staff focuses on the disciplines of Moves-in-the-field, ice dancing, freestyle, and synchronized team skating. club skaters are given opportunities to perform exhibitions at several club-sponsored events throughout the season, and to demonstrate their skills to judges, at club organized test sessions. In addition, SDFSC hosts the annual "SDFSC Silver Skate" competition, held in May. This event gives club skaters an opportunity to compete against each other, and against skaters from other clubs around the country, along with giving parents the chance to volunteer at an official USFSA sanctioned event.

To find out more information regarding the benefits of becoming a member of the South Dayton Figure Skating Club (SDFSC), please contact us.